With Steven Spielberg’s “The Adventures of Tintin: Secret of the Unicorn” hitting the silver screen, it gave me another reason to pick up Herge’s comics once again to re-read for them for the umpteen time.

“You kind of can’t grow up in New Zealand without having Tintin become a really important part of your life,” said Peter Jackson, director for the new Tintin movie in a TIME magazine interview. This was certainly true for my childhood too.

Georges Remi, or more commonly known by his pen name Herge, (left) creator of the Tintin series and also one of Belgian’s most famous comic artists that captured the imagination of readers through ages.

(Side note: Tintin traveled to Southeast Asia, with mention of Singapore and Jakarta in the book “Flight 714 to Sydney.”)

As a child, I had no clue wheresoever he and Snowy, his super cute but fiercely loyal dog, traveled to in most of his books because they are places that do not register on my young mind. But it is precisely this element of novelty that makes these books a total hit with children.

Yet little did my childhood self know that Herge, as most authors of his time, wrote books for children that were inundated with ideas reflecting popular thoughts back then but is deemed unpalatable for today’s taste.
END_OF_DOCUMENT_TOKEN_TO_BE_REPLACED

During our childhood years, I believe most people will go through an intense girly or boyish phase where if you watched Teenage Mutant Ninja Turtles, you will not touch Polly Pocket toys. For me, that girlish phase was also reflected in the choice of books I read which included the Nancy Drew series and admittedly, the Sweet Valley series.

This blog post will be mainly dedicated to Caroline Keene, author of Nancy Drew. I was a huge fan of the teenage sleuth during my senior years in elementary school and went head over heels the entire series, making sure I read all that was available in the library.

So when I did my little research for this post, I realized that Caroline Keene was merely a pseudonym. In another words, this name never existed and she was technically not a real person. Instead, Keene represented a group of ghostwriters employed by the Stratemeyer Syndicate who published this series of books.

I must say I was honestly surprised by my finding because for many years, I have always imagined Keene as an American old lady, a bit like Agatha Christie. So my shock is best summarized by a 1999 interview done with the deceased Mildred Wirt Benson, who was one of the ghostwriters of the Nancy Drew series.

Reporter: I just talked to my mother and told her that there was no Carolyn Keene. She had never known.
Benson: That’s like saying there’s no Santa Claus.

END_OF_DOCUMENT_TOKEN_TO_BE_REPLACED

Roald Dahl’s books bring back a great deal of fantastic memories largely because he is such an animated and wicked storyteller whose stories appeal to large masses of audiences, rather than being primarily constrained to children per se.

I am not particularly certain which was my first Roald Dahl book, but if my remarkably limited memory does not fail me, it should be James and the Giant Peach.

Through James Trotter, who brought me on board his big peach with his six insect friends, I entered into the world of Roald Dahl where children and the weaker ones in the society are empowered to effect changes for themselves. Although Trotter suffered for years under his abusive aunts, his hard work, resourcefulness and camaraderie helped him successfully escape his unfortunate fate.

Such a similar theme resonates in his other books such as the highly popular Charlie and the Chocolate Factory. Director Tim Burton said in a 2005 interview he responded to make the book into a movie because it respected the fact that children can be adults.

“It was one of the first times you had children’s literature that was a bit more sophisticated and dealt with darker issues and feelings,” he said. “Sinister things are a part of childhood.”

Apart from Charlie Bucket, the poor lad who lives with his parents, paternal and maternal grandparents in a rickety old house, the four other children who won the golden tickets were all warped characters. One is mad about TV, the other a glutton, another a gum addict and the last, a spoilt brat; but the most heartening part is to know that none of them had a good ending.

Watch the trailer for the movie below:

A huge portion of my early childhood memories is rather patchy and fuzzy where I barely recall the names and faces of my kindergarten classmates or teachers. But the one thing that still stayed on with me from that period was the stories by Enid Blyton.

I could proudly say I grew up with Blyton’s characters who accompanied me from my adolescence years well into my mid-elementary school years because her stories had varying levels of difficulty that catered to a wide group of readers.

Younger readers might find her fantasy stories about pixies, gnomes and fairies more appealing for they are much shorter and have straightforward plots usually to convey certain moral messages.

A story I remembered is about a forgetful girl who always misplaced her things and one fine day, as usual, she did not remember to sew a hole in her pocket. As a result, she dropped a shiny shilling given by her mum for her to buy goodies she liked. Lessons like this are often simple but useful as a platform to educate young children.

Older readers might find her detective or boarding school stories more interesting; some of my top picks would include the Famous Five, Secret Seven and Naughtiest Girl series. They have more developed plots and complex characters but still spiced with fun, adventure and excitement, the perfect ingredients to keep kids going on book after book.
END_OF_DOCUMENT_TOKEN_TO_BE_REPLACED

I am going to start a new mini-series to share with you some of my favorite childhood authors and their books that I enjoyed reading during my growing up years. It is terribly exciting for myself to dedicate time and effort to relish my memories of authors who opened my young mind to wondrous worlds that I still fantasize about from time to time. As a prelude to the series, I would like to introduce the place where I met these authors. 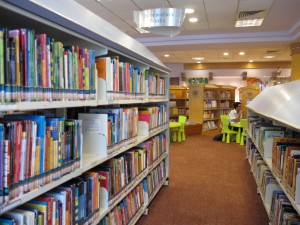 Throughout my childhood, my mama brought us to the nearby public library, as seen from the picture above, on a weekly basis to spend some time with books. We did buy books at home but it was nowhere comparable to the sheer quantity and quality of books available at the library. More importantly for my mama, she did not have to think about shoving and squeezing more books in our storeroom.

The library was very well-organized and had different sections categorized according to their languages, genres and authors. The first floor housed books for young readers while the upper story was mainly stocked with adult books. I remembered having used to wait in line for the librarian to check books out, but with the digital revolution, self-check machines were introduced to hasten the borrowing process.
END_OF_DOCUMENT_TOKEN_TO_BE_REPLACED